Notations On Our World (Weekly Edition): Random Thoughts For the Week 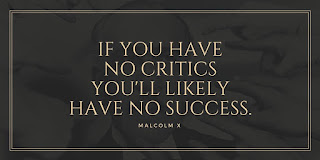 As we feature this admonition from Malcom X, Please Enjoy These Thoughts courtesy of Verne's Insight & the Marshall Project:


Execution is Strategy -- I'm not sure I completely agree with General Omar Bradley, whom Tom quotes as saying "Amateurs talk about strategy. Professionals talk about logistics" but I get the point. Victory ultimately comes down to excellent execution and as Tom notes above, it's all about what you do next, in the next five minutes. Notes Tom:
This is a checklist worth formatting and posting in front of every person in the company!


Where the First Amendment doesn’t apply. Arthur Longworth is serving a life-without-parole sentence for murder in Washington state. He’s also an accomplished and award-winning author. But now he’s being punished for what corrections officials say is the infraction of “lying to staff.” Longworth suspects he has lost privileges, including a job in the library and a seat in a classroom, because of his writing, including his work as a contributor to The Marshall Project. In collaboration with Crosscut, TMP’s Eli Hager has our story. THE MARSHALL PROJECT

Finding college by way of prison. Marcus Lilly says now that he knew he would go to prison before he would go to college. But a grant program offered during the Obama era allowed him to take classes at the Jessup Correctional Institution in Maryland. The program changed his prison experience and gave him hope for the future. Now he’s out, studying at the University of Baltimore, and proud to be able to tell his teenage son that he’s turned his life around. In collaboration with Vice, here is the latest in our “Life Inside” series. THE MARSHALL PROJECT

Massachusetts judge vacates 11,000 convictions in nearly 7,700 cases. The lab scandal surrounding former chemist Sonja Farak took another step toward resolution Thursday when a judge vacated convictions that prosecutors previously had dismissed. The move allows thousands of former defendants to more easily apply for jobs and housing now that their invalid convictions are off the books. THE BOSTON GLOBE Related: Many of the defendants already have served their time and are out of prison. WBUR
Posted by TEST at 11:45 AM