Notations From the Grid (Weekly Edition): #RandomThoughts On Our World

As our final  week begins, our team chose some #RandomThoughts about Household Debt and the central role Amazon plays in the retail space: 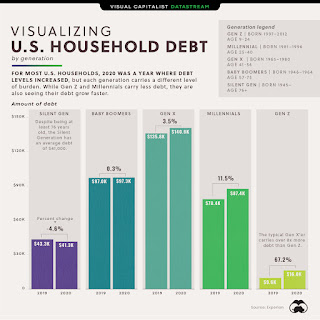 Good morning.It’s Day 2 at Amazon. Jeff Bezos stepped down as CEO yesterday and is preparing for a shot into space. Long-time lieutenant Andy Jassy, who until recently headed up Amazon Web Services, has replaced him. (More on Jassy here.)In preparation for the handoff, Amazon last week added two new entries to its famed set of 14 leadership principles:—Strive to Be Earth’s Best Employer—Success and Scale Bring Broad ResponsibilityThis is the belated Amazonian version of stakeholder capitalism. From its beginning, the company has been singularly “obsessed” with serving the customer. In the process, it provided extraordinary returns to shareholders—without ever having to worry much about the bottom line. Bezos famously fought off calls for broader corporate responsibility, sticking to a scrappy “It’s still Day 1” ethos, and arguing a “Day 2” mentality would lead to stasis and decline.The new leadership principles represent a bow to the realities of the post-pandemic world. There’s a relentless battle for talent going on, fueled by the “work from anywhere” ethos that emerged during lockdown. And there is growing recognition that companies—particularly big ones—need the trust and good will of society if they are to survive and thrive. Bezos biographer Brad Stone wrote in the New York Times this weekend that Jassy’s “defining challenge” will be “to sandpaper the rough edges of Amazon’s business tactics and formulate a humbler image for the company, particularly before the many antitrust authorities trying to unravel the opaque, interlocking parts of the Amazon empire.”But the question some are now asking is this: Will a less single-minded Amazon also be a less successful Amazon? This is a version of the broader critique leveled against stakeholder capitalism in general: Can a company catering to multiple “stakeholders” do as well as one focused on the simple math of “Total Shareholder Return”?Over the last few years, I’ve quoted numerous top executives who make two fundamental points about the second question. First, the shift to a more stakeholder-focused capitalism isn’t really a choice—it’s something society is demanding. Amazon’s move further confirms that reality. And second, if properly executed, a strong focus on social benefits can, over time, improve financial results. There doesn’t have to be a trade-off.Amazon Day 2 will be an important test of both principles.