On This Veterans Day 2022 and Remembrance Day 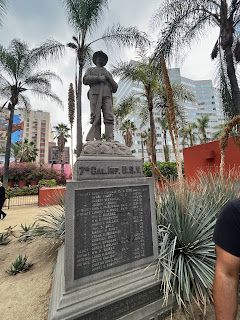 A Proclamation on Veterans Day, 2022

Today, we honor generations of patriots who have earned the title of “American veteran” — a badge of courage that unites the finest group of former service members the world has ever known.  With their selfless sacrifice, our Armed Forces have forged and defended the very idea of America — a promise of freedom and equality, democracy and justice, possibility and hope.  We owe them an incredible debt that can never be fully repaid.

Veterans Day is personal to the Biden family.  We have felt the pride that comes with seeing your child wear the uniform of the United States and the pain of long deployments far from home.  We know what it is like to pray every day for the safe return of someone you love.  And we have stood in awe of our veterans who carry the lasting wounds of war.  We pledge to continue the work to return our prisoners of war and those still missing in action and commit to remember the sacrifice of the families of those who have served.  As both a father and Commander in Chief, I firmly believe that our one truly sacred obligation as a Nation is to properly prepare and equip the brave women and men we send into harm’s way and to care for them and their loved ones when they return home.

That is why I was so proud to sign the Sergeant First Class Heath Robinson Honoring our Promise to Address Comprehensive Toxics Act, or PACT Act — the most significant expansion of benefits and services for our veterans in more than 30 years.  As the name suggests, the PACT Act fulfills a promise to our veteran community.  By funding new facilities, enabling better research, and expanding care and compensation for veterans exposed to toxic substances during their military service — as well as helping their survivors access life insurance, home loan assistance, tuition benefits, and monthly stipends — we are giving back to those who have given so much for all of us.  This law bolsters other bills I have signed this year to improve health care for veterans — from providing mammograms and screenings for service members exposed to toxins to compensating veterans who developed cancer and other medical conditions from our World War II nuclear program.  And to ensure we continue to meet our sacred obligation to our veteran families, caregivers, and survivors, the First Lady’s Joining Forces initiative is helping military spouses find jobs, supporting children of service members in classrooms, and extending physical, mental, and emotional services to families.

The Department of Veterans Affairs (VA) and other Federal agencies are also working around the clock to end veteran suicide and veteran homelessness.  As part of a comprehensive public health strategy that we released last year, the VA is funding community-led suicide prevention programs that meet veterans where they are, increasing public awareness about the importance of firearm storage in preventing suicides, and requesting billions more from the Congress to improve mental health care services for patients across the country.  At the same time, with funding from my American Rescue Plan, the VA is on track to permanently house 38,000 homeless veterans this year alone.

Fulfilling our Nation’s promise to our veterans and military families also means ensuring that everyone who serves — no matter their gender identity, sexual orientation, race, or religious background — feels safe and valued in the ranks.  Since coming into office, I have made historic reforms to the military justice system that enhance safety and protections for service members and veterans who have experienced sexual assault or harassment.  Secretary McDonough issued a zero-tolerance policy and announced that harassment and sexual assault, including sexual harassment and gender-based harassment, will not be tolerated within the Department of Veterans Affairs.  This is also a priority for Secretary of Defense Lloyd Austin, who has made preventing sexual assault and restoring the trust in the military justice processes a constant focus.  Additionally, we reversed the discriminatory ban on transgender service and directed a review of all policies and practices to ensure greater inclusivity of LGBTQ+ veterans.

In every generation, America’s veterans have been willing to give all for that which we hold sacred — freedom, justice, and democracy.  They have served selflessly, sacrificed greatly, and shouldered the burden of freedom quietly, asking no glory for themselves.  Today, let us honor them by living up to their example — putting service before self, caring for our neighbors, and working passionately to build a more perfect Union worthy of all those who protect our lives and liberty.

In respect and recognition of the contributions our veterans and their families, caregivers, and survivors have made to the cause of peace and freedom around the world, the Congress has provided (5 U.S.C. 6103(a)) that November 11 of each year shall be set aside as a legal public holiday to honor our Nation’s veterans.

NOW, THEREFORE, I, JOSEPH R. BIDEN JR., President of the United States of America, do hereby proclaim November 11, 2022, as Veterans Day.  I encourage all Americans to recognize the valor, courage, and sacrifice of these patriots through appropriate ceremonies and private prayers, and by observing two minutes of silence for our Nation’s veterans.  I also call upon Federal, State, and local officials to display the flag of the United States of America and to participate in patriotic activities in their communities.

IN WITNESS WHEREOF, I have hereunto set my hand thisseventh day of November, in the year of our Lord two thousand twenty-two, and of the Independence of the United States of America the two hundred and forty-seventh.