We begin with this that was featured in our main property as we prepare to go dark for the rest of the year:

We captured this image courtesy of the team at The Mission that in many respects captures what we embrace as we hare ever so grateful for all the opportunities we have had over the past year as we hope all continue to embrace our adventure .

It was quite a week as we were witness to the the Noble Peace Prize being awarded to ICAN , President Trump annouced the move of the US Embassy to Jerusalem and we were able to be witness to the 24 Hours of Reality.  For us, it was especially poignant as Southern California that we have the privilege to call home, was  encircled by a ring of fire.  California's Governor underscored the fact that such fires prompted by Climate Change will be the New Normal.   This is why what the Climate Reality Project, 350.Org and other organizations do is ever so critcal.

We had the pleasure to release a Notation on it  and we are pleased to present this snapshot on the Kit which we hope all will embrace for the future of the planet:

As we "go dark" through the end of the year, our team will continue a daily "curation" of our Twitter Channel as we also hope all enjoy our live Broadcast Pod featuring Al Jazeera.   As we commend ICAN for its' win,  we view this small clip courtesy of ICAN that underscores a sense of humanity and a sense of purpose as epitomized as the World celebrates the 70th Anniversary of the adoption of the Declaration of Human Rights:

This is as we have to deal with the onslaught of automation and the challenges presented and the possibilities as we embrace 2018: 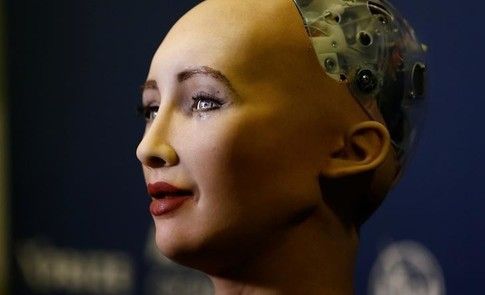 What it is: A report from Intel predicts that investment in the new passenger economy could hit $7 trillion by 2050, with services ranging from remote vehicle fleet operators to in-ride masseuses. The inevitability of autonomous vehicles on the horizon could hit workers hard, starting with trucking. According to the Bureau of Labor Statistics, 3.8 million people in the United States operate vehicles for a living, and roughly 1.7 million of them drive trucks.
Why it's important: Transportation touches almost every aspect of our economy and social structure. Exponential change here will be simultaneously exciting and stressful, creating massive opportunities for entrepreneurs to create new services — not only in the new economy, but also to manage the human element of change.

What it is: In Chad, the Wenaklabs association and UNICEF are helping children use the Internet for the first time -- using computers made with e-waste and encased in jerrycans. Mashable reports that the children, who were displaced from their homes, used their first Internet experience to look up family members.
Why it's important: In Africa, 60 percent of children lack access to the Internet. How will their lives -- and the planet -- transform when every human can use the Internet any time they wish?